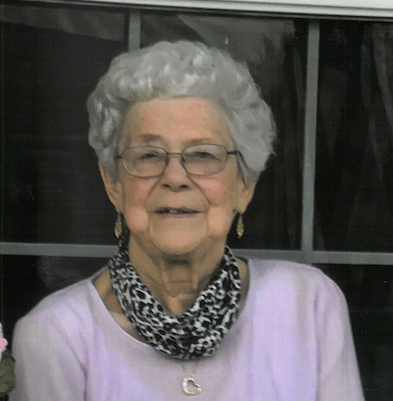 Gloria M. Nelson, 91, a longtime resident of Onalaska/West Salem passed away September 8, 2021 surrounded by loved ones. She was born October 4, 1929, in the town of Albin, Jackson County to  George and Laura (Simonson) Gee. She was united in marriage with Delbert A. Nelson on June 9, 1951 in West Salem, WI. Gloria loved to cook, dance, and enjoyed sharing time with family and friends and listening to her favorite polka music. Gloria is survived by her three children: Greg Nelson, of La Crosse, WI, Vicky (Ed) Struznik, of Butte, MT and Valerie Nelson of West Salem and her companion Robert Smith.  Her grandchildren: Noah Nelson (Richmond, VA), Brooke (Wade) Bronson (Denver CO),  and Steven(Andi) Struznik (Butte, MT); and her four beloved great grandchildren: Morgann, Brendan, Haden and Paris.  She is also survived by her siblings: Donna (Fred) Dolesy, Carol (Pete) Peasley, Laura Gonia, and Fred (Rainey) Gee.  Gloria is also survived by many nieces and nephews. Besides her husband Delbert, and parents, she was preceded in death by her son in law Ed Struznik and her grandson Ed Struznik, Jr and Addy Nelson.   A celebration of her life will be held at 12:00 pm, Tuesday, September 14, 2021 at the Gathering Place, 133 Mason Street, Onalaska. Visitation will  be from 11:00 am until the time of services. A reception and luncheon will follow the service. In lieu of flowers, memorials in her name may be made to  Eastern Star or Hospice. Coulee Region Cremation Group, Onalaska is assisting the family.