Born on December 28, 1928, in Madison, WI, to Louis and Amanda (Nielson) Georgeson, Jackie was the tenth and last surviving of twelve children. In her youth, she was very active and loved playing outdoors—describing herself as a tomboy. In high school, girls’ basketball, softball, and volleyball, absorbed much of Jackie’s energy; and, she worked at the Rennebohm Drug Store at Union Corners as well. Jackie often recalled the soda fountain, cashier, and shelf-stocking work at Rennie’s as being the best job she ever had. An enthusiastic alumnus of Madison East High School, she always looked forward to helping with planning and attending Class of 1947 reunions.

After graduation, Jackie hoped to attend university, where she wanted to study physical education. However, lacking the needed support from home, she decided to put her strong work ethic into practice in the clerical profession. Jackie was employed first at Chicago Aerial Photography, and, following her return to Madison, with the State of Wisconsin Industrial Commission and later at Master Mix Feeds.

In 1956 Jackie married Donald Herling, with whom she raised three children—Grant, Amanda (Murrell), and Guy—wanting nothing more than to be a mother. However, in 1971, with the increasing demands of the family business, Jackie joined Donald in managing C.C. Herling Company, Inc (Madison, Verona, WI) This continued until 1985, when Donald tragically died. Not long after, she sold the assets of the business, and took her last wage earning position, as a patient escort, at Meriter Hospital. (Madison, WI). Throughout her life, Jackie was a tireless worker, who also established many life-long friendships in the work place. In retirement, she enjoyed gardening, reading, solitaire, crossword puzzles, shopping, and spending time with friends and family. Not surprising, she loved being a grandmother, and looked for every opportunity to spoil her grandchildren. Grandma Herling especially made a priority of hosting sleepovers with her grandchildren.

We will always remember several things about Jackie. First, serving holiday dinners and celebrating birthdays were ways she expressed her love and appreciation for others. Additionally, throughout her adult life, Jackie was a fastidious house cleaner, annually requiring her children to help with cleaning the garage and basement–moving and dusting every object and rarely throwing anything away. Cleaning each window in the house was another agonizing ritual her kids helped with. If she was introspective, few if any of us ever heard her pronounce any deep revelations. Instead, Jackie wanted to keep things light and have a good time. Jackie was quiet regarding her spiritual views, but church attendance was important to her–until Donald died. However, during the final two years of her life she participated in a Bible study, and seemed very glad to allow others to pray for her. In her lifetime, Jackie was a member of several churches–both Moravian and Lutheran.

In December 2016, due to increased memory impairment, Jackie moved to Hillview Health Care Center, where the staff provided the highest quality care. And, similar to her high school days, she participated in many of the recreational activities offered by Hillview. She died peacefully with one of her children at her bedside—a crowning blessing of her life.

Preceding her in death were her parents, Louis and Amanda Georgeson, and the following siblings—Victor, Violet, Martin, June, Ruth, Vivian, Arnold, Gordon, Donald, Constance, and Geraldine. Her husband, Donald Herling, committed suicide in 1985. She is survived by her son Grant of La Crescent, MN, Amanda (Gary) Murrell of Clarksville, TN, and Guy (Susan) of La Crosse, WI. She is also survived by six grandchildren—Aaron (AJ), Edwin, Sofie, Lily, Charlotte, and Josef—and a good number of nieces and nephews.

We invite family and friends to attend the burial of Jackie Herling’s remains at Forest Hill Cemetery, October 26 at 1:30PM, 1 Speedway Rd, Madison, WI.  Directly following, will be a time to gather, share, and enjoy refreshments at Glenwood Community Moravian Church, 725 Gilmore St, Madison, WI. We also encourage you to share your memories, stories, and condolences at: https://couleecremation.com/coulee-cremation-obituaries/. 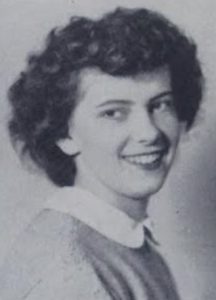