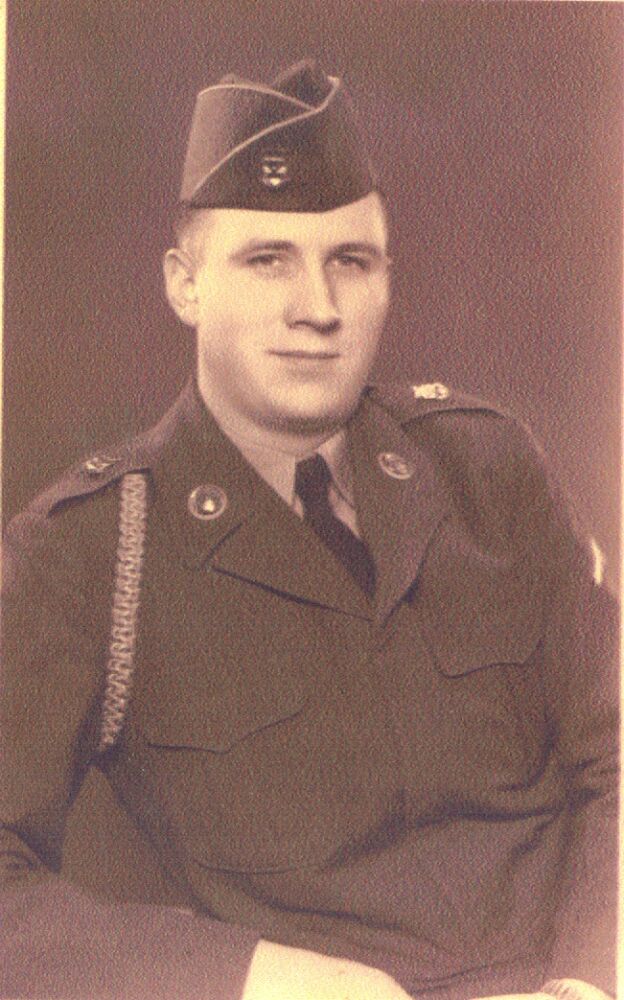 Bernard J. Eden from the township of La Crescent (MN) died on August 28th at Bethany Saint Joseph Care Center in La Crosse.   A man of the soil, Bernie was a farmer all of his life and dedicated himself to planting and harvesting crops as well as milking Holstein cows and raising pigs with his brother Theodore Eden II who preceded him in death in late 2009.   A lifelong member of the Crucifixion Church in La Crescent, Bernie was also a quiet man with a deep religious faith.  The ladies at the church generously knit Bernie a beautiful and warm prayer shawl which he joyfully wore until he took his last breath.

Born in the midst of the Great Depression on August 6, 1934, Bernie remained steeped in agriculture while enjoying the pristine natural beauty of his fields, forests and Pine Creek which coursed through his land.  Not long after graduating from La Crescent High School in 1952,  Bernie became a pitcher for the local city league team from La Crescent.  He later entered military service with the U.S. Army in early 1956 with basic training at Fort Sheridan in Illinois with training as a wire man and expert rifleman.  Thereafter, Bernie was shipped for duty in West Germany for two years of service at an army base near Ulm where he became involved in security at an ammunition dump near an artillery and tank training site.  He also was pressed into service as a radio man in occupied Germany.  Subsequently,  Bernie received a good conduct medal from the U.S. Army for his overseas service.  Bernie recalled with a great sense of pride and humor how he was singled out during basic training with high praise from his commanding officer.  His colonel singled out Bernie before his fellow soldiers for having the most orderly foot locker at Fort Sheridan.

As the last family member of his generation in the Eden family, Bernie Eden was preceded in death

by his sisters Viola, Helen and Evelyn and his brothers Henry, Theodore II, Ray and Arthur as well as his parents Sophie Kramer Eden and Theodore I.  He also is survived by thirteen nieces and nephews residing in Minnesota, Wisconsin, Michigan and Florida.  A special honor came to the Eden Family in August 18, 2022 at the Houston County Fair in Caledonia.  It was here that the Eden family farm was awarded Century Farm status.  Bernie noted that this was one of the greatest honors he ever experienced, in part because he felt that he was standing on the shoulders of his ancestors.  The Eden family farm was founded by his father Theodore I and his uncle Herman Eden in 1920 and today includes a total of 239 acres.  The foundation for the still standing red barn was mined at a stone quarry on top of a bluff only about one mile away.

There is a closing segment of a poem by Nancy Kraayenhof called “Close the Gate.”  It reads like a farmer’s prayer.  The poem recalls the legacy of farmers across the country who, like Bernard J. Eden, work tirelessly to feed the nation:

“Wash off your work boots in the puddle left by blessed rain one final time.
You always believed that the good Lord would provide and He always had somehow,
Take off your gloves and put them down, no more sweat and worry for you now.
Your labor is done, your home now is heaven; no more must you wait,
Your legacy lives on, your love of the land, and we will close the gate.”

The Eden family would like to extend special thanks to the health care professionals at the La Crescent Health Care Center and Bethany Saint Joseph Care Center who cared for and provided physical therapy for Bernie.  The family’s gratitude also is extended to Dr. Carrie Gerhard and Dr. Mary Bassing at Gundersen Health along with their staffs of physician’s assistants and nurses in providing timely health care support and medical advice during Bernie’s last stage of life.  Morever, the family remains grateful for the support offered by respite care givers from Neighbors in Action of La Crescent and Home Instead of Rochester at critically important times.  The Eden Family also thanks Fr. John L. Evans II for his pastoral care and spiritual guidance along with the members of the congregation for their prayers in support of Bernie during the final stage of his life as well as Amy Gehrke from the care team.  We call attention as well to the medical professionals associated with the Gundersen Ambulance Service and emergency EMTs.  Their highly efficient support system extended the life of a man whose death now marks the passing of a generation.

The good people of Pine Creek Valley remained a very important part of Bernie Eden’s life.  He had a care team of his own from this land including Gregory and Paula Wegner, Ed and Mary Heberlein, Ruth and Jerry Berns, and Don and Judy Thesing as well as Bruce Wegner, Glenn and Rose Wegner, Jeffrey Wegner, Patty Leitzke and James Wegner.