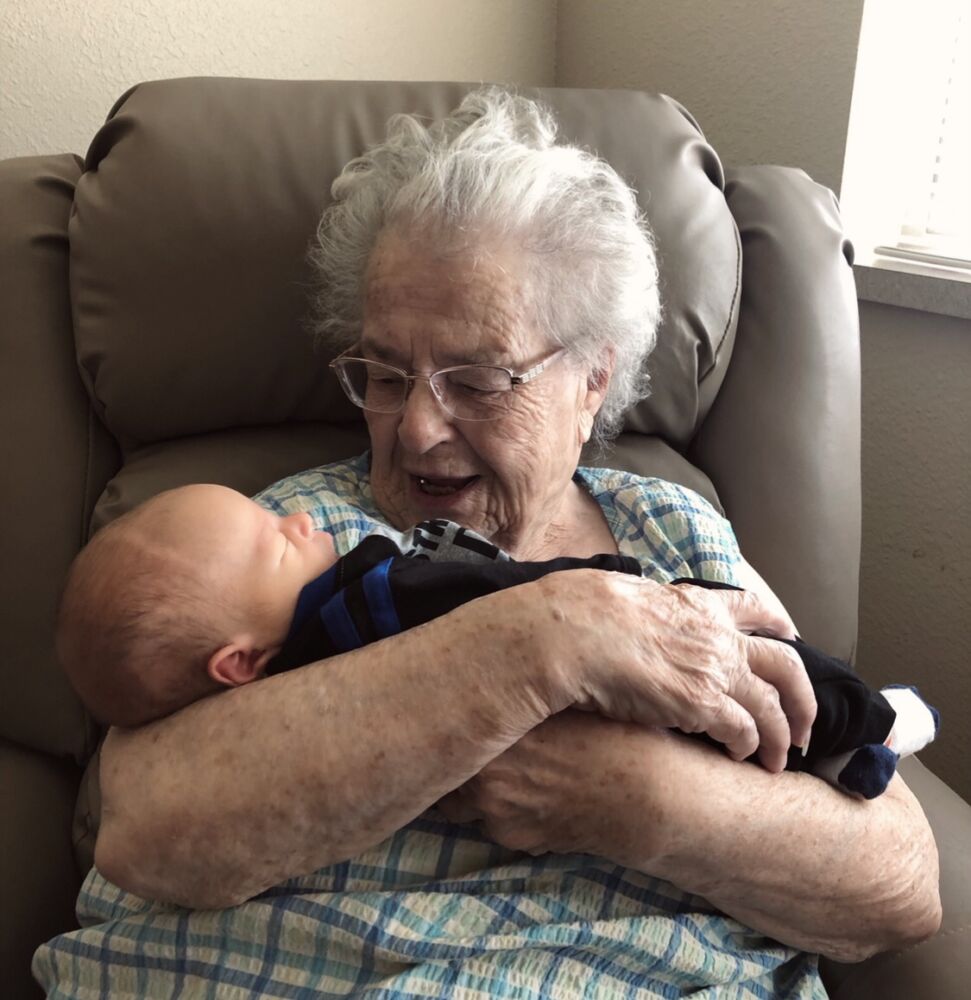 Alice Emah (McCormick) Larson was born on November 20, 1925, to Reverend Lloyd L. and Delsie (Strait) McCormick in Monroe, Wisconsin. Because of her father’s occupation, she spent much of her youth in transit, moving every few years to wherever the ministry led her family.  From West Lima to Turtle Lake, Wisconsin, all the way to Dayton Ohio, then to Ontario, Wisconsin, and on to Dell, and Cochrane, Wisconsin.  It was Alice’s faith and family that kept her grounded. Alice was a soft-spoken but strong-headed woman who led her family by example. She was a fiercely hard worker yet never boasted about her accomplishments in life. Rather, Alice remained modest and rooted in her humble upbringing.

She cherished the time she was able to spend with her maternal grandmother and namesake, Alice Strait, who lived in a part of the Kickapoo Valley in Wisconsin called Otter Creek. It was here that her levelheadedness and resourcefulness began to develop, and also where she was able to experience the true joys of childhood. Alice loved to roam the hills of the Kickapoo Valley, explore the woods, and learn the names of all of the wildflowers.

It was also as a child that Alice learned to sing and play piano. Before she was born, her family had prayed that she would be blessed with musical abilities, and the Lord obliged by gifting Alice with her mezzo soprano voice. She shared her talents generously during the course of her life at church and through teaching. Alice earned her rural teaching certificate while attending college in Eau Claire, WI.  She often spoke of her early days teaching in one room school houses where she taught, did janitorial duties including shoveling the snow and keeping the school heated through the potbelly stove.  She furthered her education while raising her family and continued to teach, to eventually earning both a Bachelor’s and Master’s Degree in Education from Winona State University.  She went on to teach several elementary grades in the Whitehall and the La Crosse School Districts before retiring at the age of 58. Her gift of music also contributed to her meeting her husband, Lowell.

On St. Patrick’s Day in 1953, after Alice had finished playing the piano and singing for the church service, Lowell asked Alice to accompany him to an ice cream parlor. She loved his sense of humor and how easily they could carry on a conversation. The following Mother’s Day, Alice accepted his marriage proposal. Her father, Reverend McCormick, conducted the wedding ceremony in Montana, Wisconsin on August 1, 1953. They started their family in Cochrane then moved to Whitehall in 1960, where Alice taught elementary school, in 1966 they moved to La Crosse.  Alice & Lowell and their family were active members of the Masonic family where they met life-long friends in Wisconsin and Port Aransas, Texas where they loved to spend their winters.

Together they had three beautiful children, Eric, a musician, Ethan, a minister, and Janita, a social worker. Alice was proud with her three children that she had one child to entertain the people, one to marry and bury them, and one to take care of them. After being blessed with her three children, Alice was gifted four wonderful grandchildren whom she cherished beyond measure. Her greatgrandchildren filled her heart and her home with so much laughter, love, and pure joy as well.

On April 12, 2022, Alice peacefully returned to her heavenly Father at the wonderful age of 96.  She is preceded in death by her husband Lowell Larson, son Eric Larson, and son-in-law, Gary Plachecki.  Alice is survived by her children Ethan Larson and his wife, Laverne and Janita Larson-Plachecki, her brother L. James McCormick and his wife Madre, her grandchildren, Heather Larson, Stephanie Larson (Kevin Ostrowski), David Larson, and Emily Larson, her greatgrandchildren, Isla, Sofia, Theo, and Makena as well as her nieces Katie and Sara McCormick.  She is also survived by the grand-daughters Laverne added to the family Jennifer Ulrichsen and Heather Inks, and great-grandchildren David and Julia; all of whom she adored.  She is also survived by other family and friends who grieve her loss.

The family would like to thank the Staff at Hillview Health Care for the care that they provided to Alice and the kindness they showed to her family.