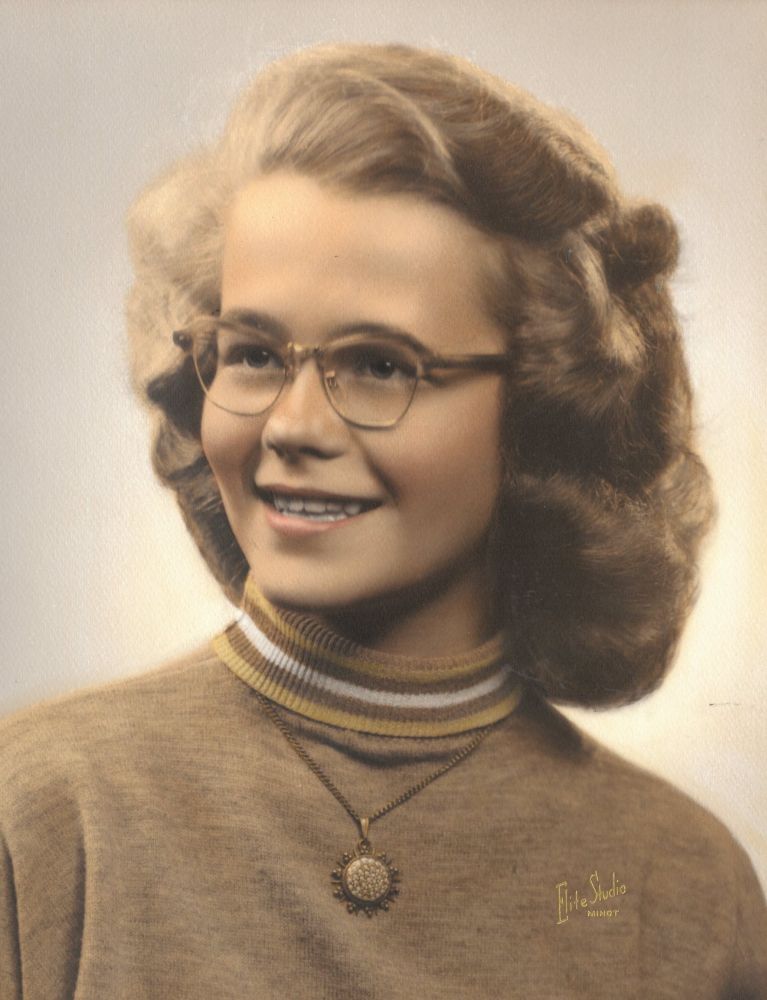 Bernadine Rudella Rittgers, 84, past away peacefully in her home on Monday March 2, 2020.

She was born on December 30, 1935 to Olga and Elmer Johnson of Tagus North Dakota. Olga, one of the first graduates of Minot State Teachers College was at the time a one-room schoolhouse teacher, and the family of three actually lived in the schoolhouse for a time on the wide open plains of central North Dakota. Her Father Elmer was a WWI veteran and an early radio and antenna salesman, the technology being in its infancy at the time. Later moving to Minot North Dakota, Bernadine attended and graduated from Dakota Lutheran High School in 1953. While working as a teller at Union National bank in Minot she met Richard Hanson and the two were married in 1955. She gave birth to Daughter Lori later that year, Son Lee in 1958 and Daughter Lynn in 1959. In 1964 she met and married Robert Rittgers and gave birth to Son Wolfgang in 1965.

Bernadine, Robert and the children moved from Minot N.D. to Onalaska Wisconsin in August of 1968 for Robert’s work as an aircraft mechanic. Bernadine began working at the La Crosse Rubber Mills, a physically demanding job making boots and footwear in 1969 and stayed until the death of Husband Robert in 1978. In 1979 she began a day-care for children that she lovingly maintained until 2004. Many if not all of the children she cared for, whom she referred to as “her kids”, often visited her well after having grown into adulthood.

Anyone who met Bernadine was immediately informed that she was proudly one-hundred percent Norwegian. So proud of her lineage, she often joked that her ancestors came to America, by water-skiing behind the Mayflower on pieces of lefse. She greatly enjoyed taking trips to the Oregon coast to be by herself at the ocean’s edge, perhaps to ponder her sea-bearing Viking heritage and the fantastic voyages that they made, or maybe it was something else. The wind-blown wheat and grasslands of North Dakota can at times resemble a great rolling sea, and perhaps it was this that drew her attention to the Pacific coast; a memory from her childhood in those days of living on the wide open plains of central North Dakota where the horizon seemed to have no end and the stars at night nearly painted the sky bone white. She remembered seeing the Milky Way as a mesmerizing blue and purple band of light that cut clear across the sky, something that made a deep impression on her. With light pollution being zero in 1940’s rural central North Dakota, that claim is enviously believable. Later in life she was intrigued by turtles and lighthouses and collected all sizes of them made from glass and porcelain, ceramic and wood. The sea and its beauty for whatever reason, was a source of great comfort to her.

She had several close friends who remained in Minot after her move to Wisconsin that she always missed terribly. Their close-knit group that formed when they were young could best be described as a Female version of the Rat Pack. When they entered a room together, they took it over. Well-dressed and classy, they turned heads and held court, and when they departed the room, people were physically exhausted from laughing and simply left wondering what in the world had just blown through. They would visit each other as often as they could over the years, but she spoke of them so often, it was clear that their absence in her everyday life was something that weighed heavy on her heart. On those occasions when they were all together, they acted as though no time had passed between their last meeting and hilarious revelry ensued. The sincerity of their Love for each other was proven by the genuine laughter that they shared when together, and the tears that followed upon departing. It must have been especially hard for Bernadine to be the last survivor of that vivacious group of Women whose side-splitting stories could easily have filled a book.

It is with great comfort to think that she is again with all of those whom she lost in life.To once again laugh and feel joy, walk along the seashore whenever she pleases, and dwell amongst the stars that she once looked up to so long ago as a little girl from the wind-kissed prairie she called home, North Dakota. Not on occasion this time…but continuously, and for eternity now.

She is survived by Daughters Lori Jameson and Lynn Roberts, Sons Lee Hanson and Wolfgang Rittgers and was preceded in death by her Mother Olga Johnson, Father Elmer Johnson, and Husbands Richard Hanson and Robert Rittgers.

A memorial service will be held at 11:00 am on Tuesday March 10, 2020 at The Gathering Place, 133 Mason St. Onalaska with visitation from 10:00 am until the time of the service.  Pastor Bill Bader will officiate.