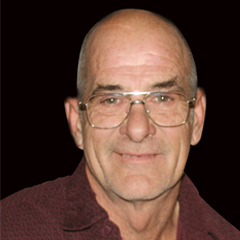 Dale J. Sutherland, 69, of Mindoro, WI, passed away on October 18, 2019, at Mayo Health Systems of La Crosse surrounded by his family. He was born November 13, 1949, in Watertown, WI. Dale was the son of the late Floyd and Margaret Sutherland. He married Mary Kastenschmidt of Mindoro.

Dale worked as a truck driver out of Janesville, WI until him and Mary moved to Mindoro in 1976. He then worked with the La Crosse County Highway Department as a mechanic for over 30 years. Dale was a hard worker that enjoyed second jobs at Paisley’s Mobile and Dale’s Repair. He served as a volunteer on the Farmington Fire Department for over 20 years. He very much enjoyed his Saturday nights at the La Crosse Fairground Speedway as part of the pit crew for the Troy Goodenough Race Team. His pride and joy, however, was “Lil Pete”, his custom built miniature Peterbuilt Truck that he spent many years beautifully restoring.

He was preceded in death by his parents and brothers, Kent and Stan Sutherland.

A memorial service will be held at 11am on Friday, October 25, 2019 at Mindoro Lutheran Church. Pastor Alyssa Mitchell will officiate. Friends may visit with family from 9am until the time of service.Dale