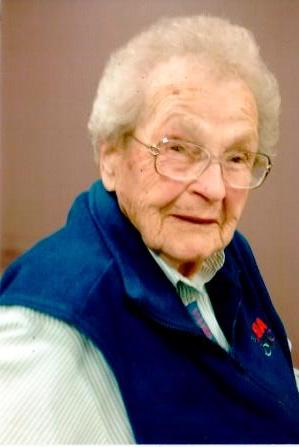 Elaine K Leonard, 94, passed away peacefully at Hillview Care Center in La Crosse, Wisconsin on Friday, August 2, 2019.  She was born in Dubuque, Iowa on February 10, 1925 to Martha and Carl Gebhard.  She graduated from high school in Jacksonville, Illinois.  Elaine married Olen Leonard on February 23, 1947 and they were married for fifty years. She lived many places throughout her life, but Onalaska, Wisconsin was her home for over 30 years.  Before Elaine had children, she worked for the SS Kresge Company in their office.

Elaine’s favorite past time was fishing with her husband, Olen and traveling in their motorhome. She gave away many beautiful dishcloths she knitted.

Elaine was a grandmother to 9 grandchildren and 5 great grandchildren.  She is further survived by her two dear sisters, Ruth Scharpf of Oshkosh, Wisconsin and Shirley (Keith) Ellenberger of Leawood, Kansas.  Elaine had two very special friends who she loved very much named Bodie and Cooper who visited her often.

The family wishes to extend their appreciation to the Mayo Clinic Hospice caregivers and Dr. Mark Jungck who was her family doctor for over thirty years and provided exceptional care and support for her.

A memorial service to celebrate Elaine’s life will be held on Saturday, August 17, at Englewood Cemetery in Clinton, Missouri with Elaine’s pastor, Reverend Scott Skogen officiating.

In lieu of flowers, a donation may be made in Elaine’s memory to North Presbyterian Church at 1327 North Salem Rd, La Crosse, Wisconsin 54603.