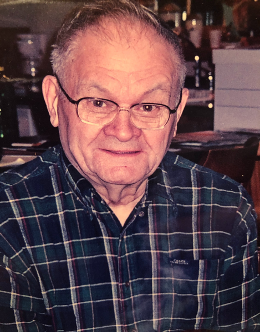 Floyd was born in Buffalo, Minnesota, to the late David and Agnes Johnson on

November 10, 1930. He grew up on a farm near Little Falls, MN. After graduating high school, he enlisted in the Army from 1951-1953. He proudly served in the Korean War in 1951. After his time in the Army, he fulfilled his dream of going to college. To pay for college, he alternated semesters by working construction, then attending a semester of college.

He took pride in his college degree in Political Science from the University of Minnesota.

After college, he went to work for the Federal Government as an IRS Agent in St. Paul, MN.

He dedicated over 30 years to this career until his retirement in 1994. An equally important job and passion was Floyd’s leadership in the Chapter 29 National Treasury Employees Union in St. Paul. He had many roles, including President. It was there that he could do what he loved best; negotiate and advocate for fair treatment of all employees. He enjoyed heated negotiations and had the determination to keep the pressure on until he knew that he was satisfied with the results for fellow employees.

He married Lornell(Melcher) in 1962 and they enjoyed 58 years of marriage together until her death in February, 2020. Together, they raised two children and many pets in Mahtomedi, MN. Several years after Floyd retired, they moved up to Danbury, WI, where he could be in the woods, free of the hustle and bustle of city living. It was up north where they continued to be an influential role in the lives of their grandchildren, Tanya and Michael.

Anyone who knew Floyd will miss his determination, stoicism, passion for Democratic politics, endless stories at the dining room table, infectious laugh, sense of humor, and his love of red wine and baked goods.

He will also be remembered for how much he helped others, his generosity of his time, advice, and skills. He could build, fix, and design anything he needed. He was a very proud dad, grandpa, and great grandpa. He didn’t miss a game, concert, or performance of his children or grandchildren. His family looked up to him and respected his patience, intellect, and work ethic.

Floyd is preceded in death by his wife, Lornell, parents, David and Agnes , and five older siblings, Olive, Erling, Constance, Violet, and Wilfred.

Floyd is survived by his son, Gregg(Tracey Martinez) Johnson of Webster, WI,

Floyd requested to be buried in the Minnesota State Veteran’s Cemetery in Little Falls, MN.

His family will honor him with a graveside ceremony in the spring.

The family would like to thank the caregivers at Bluffview Memory Care in Holmen, WI as well as the staff at Amery Memory Care in Amery, WI for the love and care they showed Floyd over the past two years.

Floyd was a lifelong admirer of Hubert H. Humphrey. This quote is symbolic of what Floyd stood for as a human being: helping others.