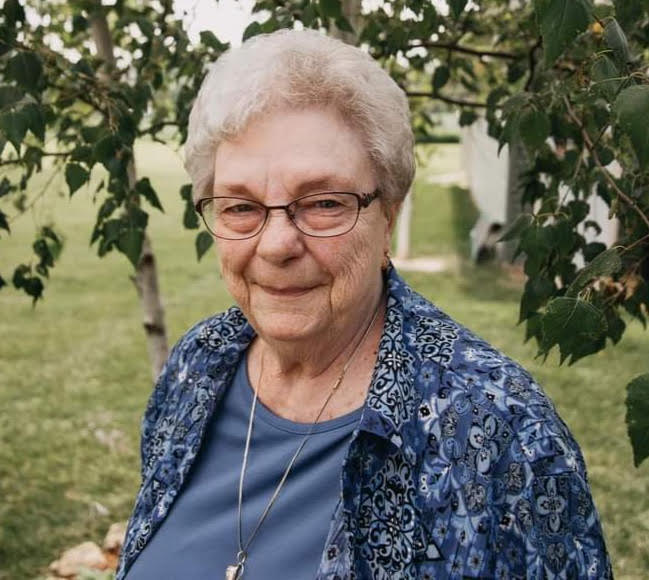 Janyce Faye (Chunat) Vuillemot, 82, passed away December 28, 2020 at her home, under her terms. She was born on May 17, 1938, the eldest daughter of Harold and Gladys (Schwert) Chunat, in Alhambra, California.

At the age of three, Jan moved back to the Schwert Family Farm in Wauzeka, WI with her mother and sister. She was raised, under the same roof, with four generations until her dad returned from WWII. The family then moved to Prairie du Chien, WI, where Jan graduated from high school in 1956.

Jan decided to further her education at the College of Medical Technology in Minneapolis, MN where she received her certification as a laboratory and x-ray technician in 1957. It was at the Valentine’s Day dance that she met, danced and fell in love with Bob Vuillemot.

Bob and Jan were married January 18, 1958 in Prairie du Chien, WI. They made their home in Indiana while Bob finished his college degree. They had 3 children while living in Indiana and chose to move back to Wauzeka, WI in 1968. Jan had always worked as a lab and x-ray tech at clinics and hospitals. While the Vuillemot family settled into Prairie du Chien, WI, Jan got a job at General Hospital. When the hospital closed she worked at Farrell Clinic, which became Gundersen Clinic, till her retirement in 2000. She made many lifelong friends at work and loved what she did.

Jan’s love for football began with Bob’s passion for the game. He was a player, then a high school coach. Jan became known in the SWAL Conference as “The Cow Bell Lady”. She rang her cow bell loud and proud for her son’s and later for her grandsons’ and great-grandsons’ games. She was definitely one of the Prairie Blackhawks biggest fans. “First in 10 let’s do it again boys!” “Hit them high, hit them low, come on team let’s go, go, go!” Cheering the Steelers on to victory while wearing her prized Steelers hat was a common event during football season.

Jan’s love of travel took her and Bob to Australia, New Zealand, Alaska, Colorado, California and The Badlands. Her bucket list included white water rafting in Alaska, ziplining in Hawaii and a hot air balloon ride, which she and Bob truly enjoyed. After Bob passed, Jan traveled to Hawaii to spend time with her cousin. Her last trip was to Florida with her daughter Camille and son in law Brian. Jan’s love for driving had her enjoying back roads and new roads. She always found a different route to enjoy.

In 2008 Jan and Bob moved to Holmen, WI to be closer to family. The Holmen Senior Center became Jan’s second home. She played cards, bingo, exercised, enjoyed special events and had her noon meal. The friendships she made there were very important to her. She cared so much for all of the Senior Center members. Jan loved playing cards especially euchre. She played every day at Seniors then once a week in West Salem, Onalaska Legion and Holmen Legion halls.

Jan was a fantastic cook. She was dubbed “The Cook” because of all the delicious meals she prepared for duck hunters, deer hunters, football fans, friends and family. Oh Those Ribs!!! Her special three day ribs were looked forward to every Christmas. She also was an avid gardener. Her flowers were splendid and she spent many hours planting to make her yard beautiful. Jan’s love of family took her into genealogy. Hours and hours were spent looking through court house documents, libraries and exchanging information with her cousin Jackie. She researched for years and wrote it all down by hand.

A Celebration of Jan’s life will be held at Coulee Region Cremation Group, 133 Mason Street, Onalaska, WI on January 23, 2021 with visitation at 12 p.m., service at 1:30 p.m. and luncheon at 2:30 p.m. Masks are required and social distancing is recommended.

Thank you to Gundersen Hospice and those who cared for Jan all these years.