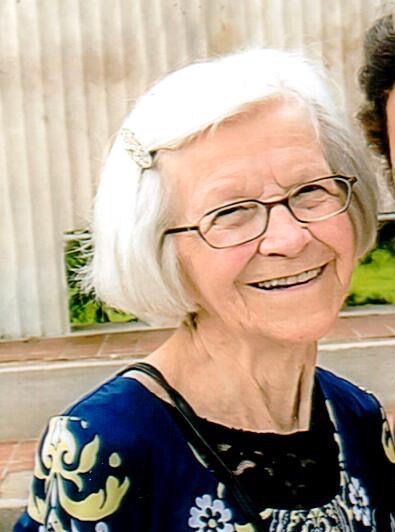 Jeanette T. Hill, 96, of Onalaska died Wednesday, September 18, at Mulder Health Care. She was born August 10, 1923 to William and Nettie (La Mere) Wolford in Prairie du Chien, WI. After graduating from Prairie High School, she worked for Frank Antoine in his law office. In 1942, she volunteered as a WAVE. She left for New York to attend Hunter College, then to Oklahoma A&M University. She was assigned to the Bureau of Ships in Washington, DC during World War II.

In 1951, Jeanette married Donald J. Hill, a chemical engineer with Trane Company. They had six sons. While raising their sons, Jeanette volunteered at their schools and at church. After the youngest started school she attended UW-L, graduating with degrees in English and history. She taught in the La Crosse school system for several years. Later, Jeanette became a realtor with the Wheeler Company.

Jeanette had a long history of community service. After retiring, she volunteered at Gundersen Lutheran Hospital. When La Crosse Visiting Nurses began a hospice program, she served on the board as well as comforted the dying. While living at Eagle Crest, Jeanette always had time to help neighbors and friends.

A memorial service will be held on Wednesday, September 25, 2019 at 11 AM in the Gathering Place, 133 Mason St, Onalaska, with visitation being held from 10 AM until the time of the service. Deacon Frank Abnet will officiate. Coulee Region Cremation Group is assisting the family. Online condolences may be left at www. couleecremation.com.