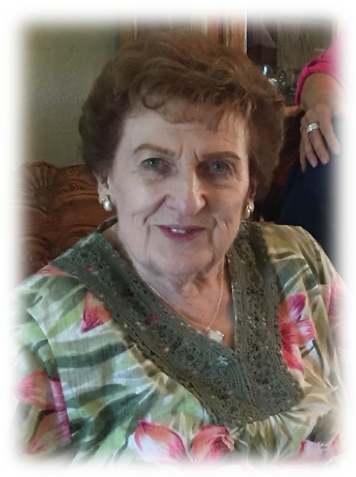 She was preceded in death by her beloved husband, Denis Naughton (born September 11, 1934; died May 3, 2007 in Bradenton, Fla. where they were winter residents; his survivors at that time included a sister, Margaret Falvey of County Cork, Ireland, and brothers Seamus Naughton of Birmingham, England and Daniel J. Naughton of Chicago).  After a lasting courtship, Joanne and Denis were happily married on March 28, 1984.  Together, they shared many wonderful times with their great love of travel, including numerous trips to Denis’ birth country, Ireland.  Their love of good food was often a significant part of their travel adventures together.

She was also preceded in death by her parents, for whom she helped provide much loving care, Kenneth and Mabel (Wrobel) Hardie of La Crosse; by her brother James K. and sister-in-law Jeanine (Halverson) Hardie of West Salem; and by her niece, Lori Studnicka of Madison.

She remained very close with her siblings throughout her entire life, and will be deeply missed by them, including brother David and sister-in-law Lois Hardie, of Onalaska and staying in Bradenton, Fla.; sister Sandra Hardie of Madison; brother Robert and sister-in-law Linda Hardie of Milton; sister Dana and brother-in-law Ady Brudos of Madison; and brother Thomas and sister-in-law Lea Ann Hardie of La Crosse.  She will also be deeply missed by her nieces and nephews, to whom she was a very special Aunt, including special nephew Anthony Hardie in Florida, nephew Don and wife Mary Hardie of West Salem, and many other dear nieces and nephews; by many very dear and caring friends and neighbors, including Adam Klinkhammer of Holmen, Laurie Wolf of Onalaska, Debbie Sedevie of Onalaska, and so many others; and by her devoted canine companion, Toby.

Joanne was a graduate of La Crosse Logan High School, Class of 1954.  She lived and worked in metro Chicago for many years.  When she returned home with Denis to the La Crosse area, they lived very happily on Monitor Street in La Crosse.  Following his death, she lived on Kristy Lane in Onalaska.  Both spoke often of their deep appreciation for their many wonderful neighbors.

With special thanks to the compassionate and deeply caring nurses, caregivers, and staff of BrightStar Care and Mayo Home Hospice, whose collaborative and caring efforts allowed her to remain in her own home through to the end.

The cremains of Joanne and Denis will be interred together at Woodlawn Cemetery in La Crosse, Wisconsin.  A celebration of life will be held virtually at a time to be determined.