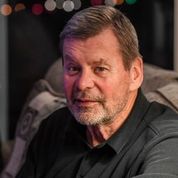 John Ward of Onalaska died on March 10, 2021 of Parkinson’s complications. He passed away peacefully at Gundersen Medical Center with family at his side.

John was born November 17, 1945 in Huron, South Dakota to Roger and Peggy Ward and grew up in Richfield, Minnesota. He graduated from Winona State University in Business Administration. John served in the Navy and was a Vietnam veteran. His last tour of duty was SHAPE headquarters in Belgium. John had a long career in business and sales. John had a passion for golf. He loved being on a golf course with his buddies and his sons. He was an avid Bob Dylan fan. John greatly enjoyed the companionship of his dogs as well.

John was preceded in death by his father, Roger, mother, Peggy, and his brother, Bob.

A memorial service will be held at a later date due to family availability and COVID.