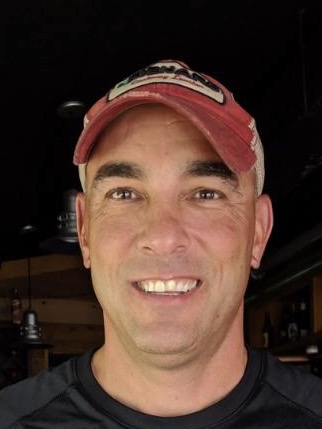 Lance E. Schmitt, 48, of Onalaska died March 4th, 2020 at University Hospital in Madison from complications following heart surgery performed at Gundersen Health System in La Crosse. He was born March 9, 1971 to Dean and Lorraine Schmitt of Fountain City, WI.  He grew up in Onalaska and graduated from Aquinas High School where he was a state champion wrestler. In 2018, he was awarded the Aquinas Blugold Wrestling Legacy Award.  On October 14, 2006, he married Sara Mathis of Waukon in La Crosse, WI. Lance owned Schmitt Builders in Onalaska. He was an accomplished carpenter and worked with his brother, Lee. His passions were his children, enjoying mornings and getting them ready for school and on the bus.  He also enjoyed trips up north to the Wessleys, trout fishing, taking walks with Sara and Coco, playing cards with friends and family, and cruising backroads. Everybody loved Lance for his playful pranks, his strong, helping hands and his easy-going nature.  He was a frequent visitor to local watering holes and made many friends during these adventures.  Lance will be greatly missed.

He was preceded in death by his parents, Dean and Lorraine Schmitt.

Consistent with Lance’s caring spirit and willingness to help others, he has become a hero to many through organ donation.

To view Lance’s memorial video click the link below:
Click here to view the video on the web and start sharing it on-line.