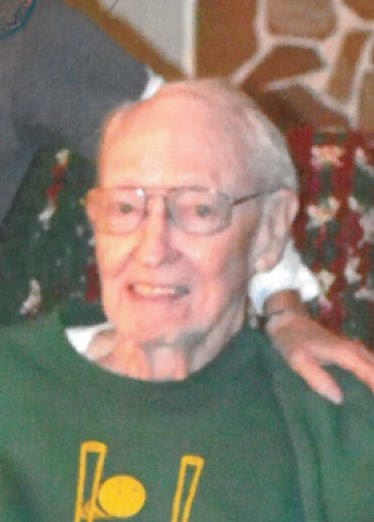 Lorin Clarence Hyslop was born on July 2, 1932 at home in East St. Louis, IL and died at SpringBrook Assisted living in Onalaska, WI on Jan. 11, 2020.
He was a kind, brilliant, sweet, funny, gentle man and always a gentleman. He was pre-deceased by his parents, Clarence and Mina Hyslop, brother Wendell Hyslop, and wife Jeanann Hyslop. He is survived by and will be forever missed by his daughters, Kimberlee (Jeff Janis) Hyslop, Dawn (Van) Zimmerman, granddaughters Trista Zimmerman (fiance’ Grant Fullmer), and Cali Zimmerman (David Smith). He was also ‘Grandpa’ to Amy Bonadurer. He is further survived by niece Brenda (Mike) Mateer and nephew Rob Hyslop, who said, “Lorin was one of my favorite people in this world”. His dog, Wrigley, misses him too.
Lorin was somewhat adrift after high school and some college so he joined the Air Force to become a pilot. Unfortunately, he was partially color-blind and ended up in Monterey, CA at the Defense Language Institute Foreign Language Center learning to be a Russian language specialist. After intense training, he was stationed in Darmstadt, Germany to intercept Russian radio transmissions. He was able to travel all around Europe and wrote many letters and postcards home to his mother, who saved them all. He later wrote his memoirs using the long-past details in those letters. When he was discharged in 1956, with nowhere in particular to go, his friend John Jenks told him about La Crosse and they enrolled in the University. It was there while completing a double major in History and English (in 3 years), working as a DJ at WXOW, serving as managing editor of the school paper, and working at Heileman’s (for the free beer), that he met Jeanann Gibson when he was a stage hand for a play. They were married in 1959 and moved to Southern Illinois so he could attend graduate school to work on a masters degree in American history. He also pursued a career in writing as a newspaper reporter and journalist. Kimberlee was born in 1960. They moved back to La Crosse and Dawn was born in 1962. After a couple of years working at the Janesville Gazette, they returned to La Crosse for good and Lorin worked for Trane Company as the editor of the “Trane Triangle” for several years. He then worked for accounting firms McGladrey and Alexander Grant. During this time, he continued taking classes and at age 52 earned his C.P.A. He became the controller of Pepsi-Cola Bottling of La Crosse in 1984 and was appointed Chief Financial Officer in 1994. He retired after 16 years with the company.
Retirement was a challenge. He wrote this about it, “I have felt like this – something like this – before, when we were coming home from Europe and were to be discharged. A kind of lost feeling. A drifting, floating feeling – rudderless , as it were – no where to go and no need to go there.” Eventually, he settled in, bowling, golfing, boating, and re-discovering his love of reading. He and Jeanann loved their home, especially the patio where family and neighbors (Tom and Sally, Bill and Amy and many more) would gather for cocktails, parties and even fireworks!
Jeanann died in 2013 and he never fully recovered from her loss. He moved to SpringBrook in the summer of 2016. Though Alzheimer’s tried to steal his brilliant mind, he never lost his smile, kindness and ready chuckle. He never wrote the great American novel or got to sail away on a 3-masted sloop but he loved his life and his family.
Dad, Grandpa, Lorin: Rest in the peace you so richly deserve.
There will be no funeral services. Thank you to the staff at SpringBrook for their care. To honor his memory, please support Alzheimer’s research.