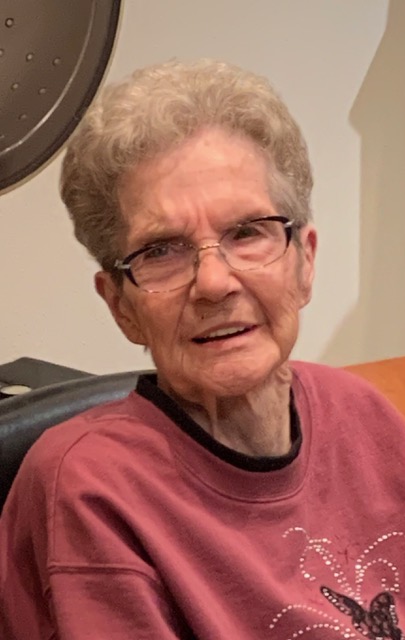 Mary Margaret was born in Dodge, Wisconsin October 22nd, 1928 to Mary Francis (Kupferschmidt) and Carl Peter Wagner.  On May 29th, 1948 she married Frank Lambert Kiedrowski at Sacred Heart Catholic Church in Pine Creek, WI.  They later divorced.  She was a mother of eight children and a very busy homemaker, who enjoyed caring for her family.  Mary worked as a professional seamstress and as head cook at a local restaurant.  She showcased her cooking, sewing and gardening talents at the Trempealeau County Fair, where she earned many blue and gold ribbons.  She enjoyed volunteering at St. Bartholomew’s Catholic Church in Trempealeau and supporting organizations with various fundraisers.  Over the years she enjoyed her flower gardens and eventually transitioned from a traditional bike to a stationary bicycle to keep active.

In her final years, Mary was diligent with her daily routine and thrived from the exceptional care that she received from everyone at Onalaska Care Center.  She was dedicated to her daily walks.  She would never miss an opportunity to play bingo.    Mary also enjoyed playing Kings Corner with visitors.  She especially enjoyed time with family and friends as they kept her informed of current events and shared sweet treats and goodies from their garden.

Memorial gifts will be directed to the Salvation Army in La Crosse, Wisconsin