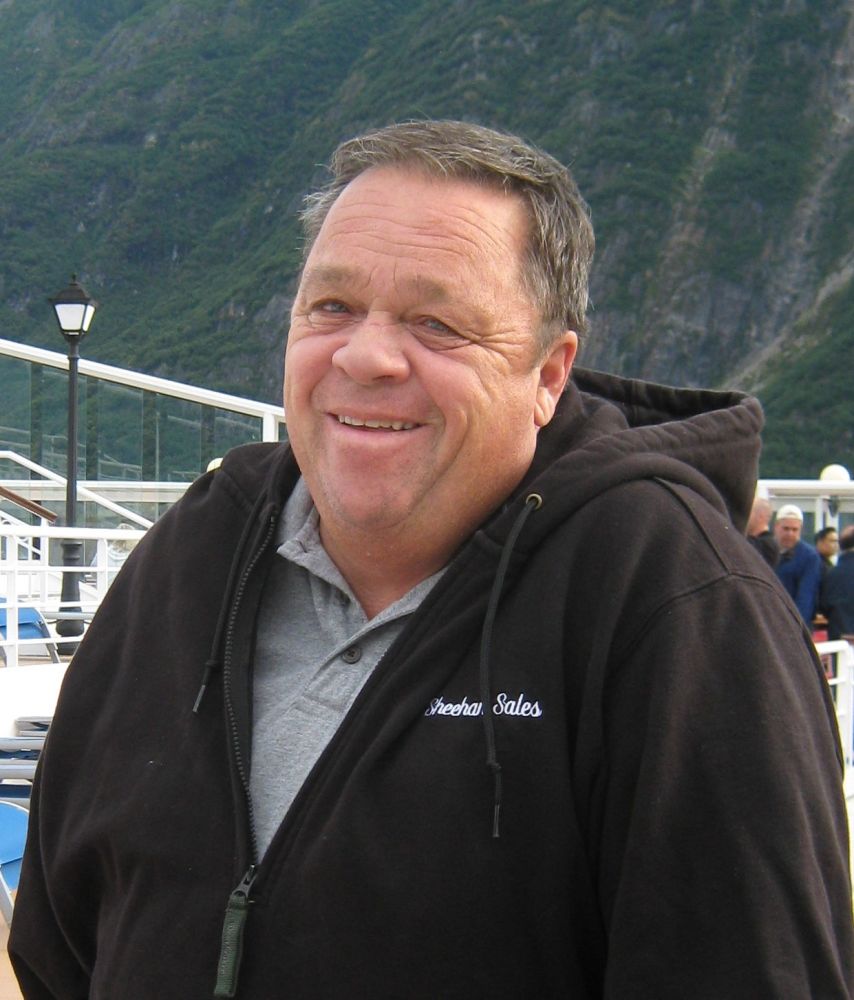 Mitch was the first born of Charles (Chuck) and Winnifred (Winnie Klein) Sheehan on October 9, 1952.  Mitch passed away peacefully from heart failure and severe COPD on Sunday, February 23, 2020.

Mitch graduated from Caledonia High School in 1971.  He played the trumpet in band and was also a member of the Lettermen’s Club.  Mitch excelled at football where he played both offense and defense.  In his senior year, he made all-conference honorable mention.  He also enjoyed baseball, driving fast cars, and raising heck!  After high school, he attended Rochester Technical School and later he studied business at UW-La Crosse.

He married Joanne Paczkowski and they later divorced.  To that union two children were born – Anne Marie and Matthew Joseph.

On September 9, 1994 he married Sue Gordon and they recently celebrated their 25th wedding anniversary.  To that union two children were born – Katelyn Amanda and Megan Elizabeth.

Most people knew Mitch as the tire guy.  He started his tire career at Montgomery Wards in La Crosse, WI.  Later forming a partnership with the late Larry Barney and launching Riverland Retread.  For many years Mitch operated his own tire business, Sheehan Sales.  He was proud of Matt’s ability to change a loader tire in record time – while wearing his “Jesus sandals.”  Kate and Megan knew their way around the tire shop too.  They put all of the delivery drivers to shame.  The girls could stack tires just as high as the guys.  Sue helped with deliveries, record keeping, and those dreadful audits.  When a container shipment arrived – it was all hands on deck to get it unloaded in the allotted time.

Mitch also worked for GCR Firestone with his buddy the late Chuck Goyette (Cheap Charlie).  Later he had the opportunity to represent Strategic Import where he was their OTR expert.  He really enjoyed when the Chinese factory representatives came to the US and spent a few days with him on the road.  The reps are probably still talking about that “wild man” who showed them how to shoot a gun – something taboo in their communist society.  Mitch had the gift to gab, so he had a lot of fun working the SEMA Show in Las Vegas – but not too much fun because there was work to be done!

Mitch’s other passions included fishing, hunting, and firearms.  His marksmanship was impressive.  He had a trophy to show and a story to tell.  He looked forward to hunting with his brothers and close friends. “If it’s brown it’s down!”  In the later years as his body wore down, he enjoyed coaching the younger hunters.

As a child, Mitch made bologna and sausage with his relatives.  He took up that hobby and truly found his calling.  When his health required him to go low sodium, he adapted the recipes.  If you have ever tried his low sodium meats, you’d be hard pressed to know the difference.  The low sodium dietary changes impacted his life.  He noticed an immediate improvement in his health because he wasn’t retaining as much fluid.  He was honored to be chosen as an Administrator of a FaceBook group called “Shakin’ the Salt”.  The group has grown 10x the size and now has almost 15,000 members.  Everyone looked forward to seeing what was cooking in the Sheehan household.  The comradery of the group made his last years fulfilling.

Mitch wasn’t the best at letting his loved ones know how proud he was of them nor how much he loved them.  He knew his time on earth was limited so he wanted them to be tough enough to survive without him.  He was so proud that each of the kids followed their passions.  Anne obtained a PH D in Biochemistry and is specializing in disease research.  Matt has his father’s entrepreneurial spirit.  He has followed his green thumb passion and is well respected in his field in a state where it’s legal.  Kate obtained a Bachelor of Science in Nursing and is working as an RN at Gundersen.  She is now pursuing her Masters.  Megan obtained a Bachelor of Science from UW-L with a Biology Major and a Chemistry Minor.  She is pursuing her dream of caring for animals and is currently working at the Dane County Humane Society.

Sue was Mitch’s better half.  She poured herself into caring for him and giving him quality of life.  Her dedication was never ending.  Her love was unconditional.  He lived long enough for one more Valentine’s Day with her and to celebrate her recent promotion.  Sue wore a peach colored outfit on their first date, so peach roses became his signature flower to her.  Under that gruff exterior was a teddy bear.

After talking about building a home for the past 20 years, it finally happened.  A special thank you to the contractors for making the dream become a reality.  Everyone understood the urgency and wanted to make it happen before it was too late.  Mitch had made a promise to his bride and he made sure it was completed.  The big move occurred the first week of September, so Mitch did get to enjoy their home for a brief time.

The mechanical heart valve, bypass surgery, dietary changes and quitting smoking definitely prolonged his life, but in the end the struggle became too much for his body.   Leaving for that last trip to the hospital, he said that he wanted more time.  More time to right the wrongs.  More time to spend together.  More time to live instead of work.  His advice would be that life’s too short so enjoy it now before there’s no tomorrow.

A special thank you to Dr. Ted Thompson and Katie Stewart, PA-C of the Neighborhood Family Clinic.  Mitch appreciated your common sense approach to medicine.

We are thankful for the many professionals at Gundersen Health System – especially Cardiology, Cardiac Rehab, and the Dental Specialties Departments.  A special thank you to Juliana Wypyszynski, NP and Mary Ann Campbell, DDS – we’re sure Mitch will be a patient you’ll always remember.  The care he received in the Emergency Room, in the Cardio/Pulmonary unit, from Respiratory Therapy, and also in the Critical Care unit was exceptional.  Carrie Lapham, NP of Palliative Care was beyond helpful and comforting in his final days.  Mitch made friends where ever he went.  Samples of his latest recipe were shared and advice given for anyone interested in smoking meats.  Even as he was being wheeled to Critical Care, he was handing out samples of the latest bologna run.  No lie!

The care he received during his last week allowed time for good byes and many funny stories to be told.  The family and friends that came to visit him during his last stay was incredible.  The support and outpouring of love was amazing.  We take comfort knowing that he passed away peacefully in the hospital surrounded by his family and loyal friend Bob while listening to 60’s music – back when music was music!  We are thankful that he is no longer in pain and that he can now breathe freely.

Mitch is survived by his wife Sue and children: Anne of Eugene, OR; Matt of Iron Mountain, MI; Katelyn of La Crescent, MN; and Megan of Madison, WI.  He is also survived by his sister Joy (Chris) Maytnier of Austin, TX, and by brothers Jeff (Shelley), Dan (Linda), and Jim (fiancée Mary) all of Caledonia, MN.    Mitch had a special bond with his niece Shannon and her mother Diane.  Mitch was exceptionally proud to be a grandfather to Anne’s daughter Grace.  His goal was to be healthy enough to go back to Oregon so he could hold her one more time.  Thankfully video chats helped fill that void since that dream went unfulfilled.  Mitch was the crazy uncle to Shannon, Chelsey, Ally, Shane, Stephen, Levi, Sarah, and Connor – known affectionately as the dirty dozen.  Mitch is also survived by his godchildren Julie (Klein) Olinger and Jade Johnson.

Thank you to the family, friends, neighbors, and customers that are too numerous to list.  Your calls and visits over the years brought joy to his life and a twinkle to his eye.  Bob Chase will forever hold a special place in our hearts.  Everyone should be so lucky to have such a friend.

We invite you to attend a Celebration of Life on Saturday, March 7th from 11 AM to 2 PM at the Brownsville Community Center (104 6th Street, Brownsville, MN  55919).  We hope that you will enjoy a meal and share a special memory of Mitch’s larger than life personality.  If you are unable to attend, please mail condolences to PO Box 29, Hokah, MN  55941