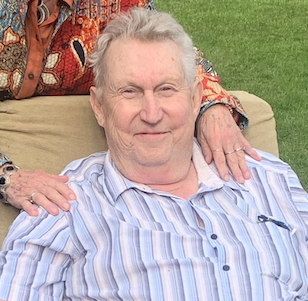 Orlin Clark lost his heroic fight against prostate cancer on Tuesday, June 22, 2021, with his family by his side at Gundersen Health System.

Orlin was born in Ontario, Wisconsin, on October 28, 1945, to Richard and Ruby Clark. He grew up on the family farm, where he learned about gardening and harvesting nature’s delicacies such as morel mushrooms, wild black raspberries, and watercress. He became an accomplished hunter of deer, turkey, and other wild game at a young age. When he was old enough, Orlin went to a one-room schoolhouse until 6th grade. He often recounted the tale of taking his little sister Geneice with him to school when she wasn’t old enough because he wanted to show her off! Orlin graduated from Brookwood High School.

One of the drawbacks of farming was the inability to join organized sports after school. But Orlin found other ways of getting involved at Brookwood High School. He was in charge of the AV equipment, and he mastered the game of ping-pong during his school lunch hour, a skill that would lead him to fame in the National Guard after graduating from Brookwood High School.

He met his wife and love of his life, Ginny, at the Ontario Community Hall at a wedding dance; they celebrated 55 years of their marriage on October 16th, 2020. Orlin earned an associate degree from Western Wisconsin Technical College in electronics, and then joined the U.S. Army National Guard and served from 1965-1972. He then put his degree to work selling copy machines at Tri-State Business Machines in La Crosse. Eventually, he changed direction and became president of the new Home Savings and Loan branch office in Onalaska. Orlin continued working with mortgages and lending for many years, while also following his passion for off-roading. He and Ginny started Midwest Off-Road Center in1976 until he sold it. He later owned and operated Rivers n Roads from 1990-1999. Orlin worked until his illness prevented him, and eventually retired from his made-to-fit job with forklift equipment sales for Bernie’s Equipment, where he also taught classes about forklift safety.

Orlin loved traveling, he especially liked to drive as it gave him the freedom to stop and explore whenever he saw something interesting. He would always drive out of his way so he and Ginny could sample the flavor of the day from Culvers.

Besides being a great husband and a great father, Orlin was a leader. He was kind to everyone. He was a rare combination: genuine, ethical, compassionate, and fair. People were always drawn to his charisma and friendly, easy-going nature. He could remember details about people because he listened. He read the newspaper voraciously and knew at least a little about everything. He offered advice to anyone, and if he didn’t know the answer, he probably knew a guy.

Orlin loved his grandchildren even more than he loved racing! He would drop everything and drive 2-5 hours to see his grandkids or pay respects to one of their many friends. His grandchildren always loved to empty Bumpa’s secret candy stash or play with the pen flashlight that he kept in his button-down shirt pocket. He and Ginny attended all their games, events, and celebrations.

Orlin and Ginny were known for their road rally games and tours of Amish country for all the best homemade goodies. At Clark family reunions, he would raid the pockets of his uncles, aunts, and cousins by auctioning off the family’s donations to raise money for charities. Orlin was a big fan of dessert, and Ginny dutifully baked him pies of every fruit of the season at his request. He’d even save his plastic fork at gatherings in hopes of dessert! Orlin enjoyed Sunday Morning on CBS for 40 years and they recorded it when not home. Between naps in his recliner, he enjoyed watching Jeopardy, Gunsmoke, and The Andy Griffith Show, unless the Packers were playing.

Everyone knew how much Orlin liked Jeeps, he is well-known for his iconic 1974 Yellow CJ5 Jeep. He and Ginny regularly raced and went trail riding with friends from the River City Four Wheelers, a club they helped establish. Weekend campouts and racing events became his family’s norm. He was known for putting the pedal to the metal until his opponent saw the word, “Gotcha!” on the back of the Jeep as he finished in the lead.

Orlin was instrumental in getting motorsports to the point they are today. He and Ginny have been significant contributors to the four-wheel-drive scene in the midwest over the last forty-five years.  Orlin spent time as president of the Midwest Four-Wheel-Drive Association, Wisconsin Four-Wheel-Drive Association, and started the Central Mudracing Association in 1988. He was a founder of the River City Four Wheelers and served as president for many terms. Old-school racers will remember Orlin serving Southern Comfort Old Fashioneds in his tuxedo t-shirt at the annual Midwest Four Wheel Drive Association conventions. Orlin loved to negotiate and earned the nickname and CB handle “Wheeler Dealer” because he always drove a hard bargain, whether he was selling Jeep parts or buying loaves of cheesy garlic bread.

There is living proof of Orlin’s influence as his contributions remain. Orlin served on many community organizations throughout his life including the Onalaska Jaycees, Onalaska Planning Commission, Kiwanis, Moose Club, St. Patrick’s Parish, and Coon Valley American Legion. We can see and feel his impact at the Onalaska community park and building, the Whitestown shed and garage, the off-road vehicles that went faster due to his advice, and the contagious passion and love for motorsports events. We all have memories of his sense of humor and clever comments, and of course, his most cherished grandchildren who have yet to make their contributions to the world. Orlin’s charity and giving spirit will never be forgotten. We do what we can with the time we have left. Orlin had more to say and more to do. We can all make him proud by living our lives with as much enthusiasm.

The Clark family would like to thank the Oncology, Radiology, Urology, and Palliative medical teams at the Gundersen Health System, our nurse advocate, and especially the doctors and nurses on the sixth floor who took such loving care of him until the end. He received more than just care and treatment from the compassionate staff members that were lucky enough to meet him. Throughout his illness, Orlin kept his medical team amused with talk of having a Fireball and 7-Up. Cheers, Orlin!

A celebration of life for Orlin will be held on Sunday, June 27, 2021 at the Onalaska American Legion Post 336 from 2-6pm