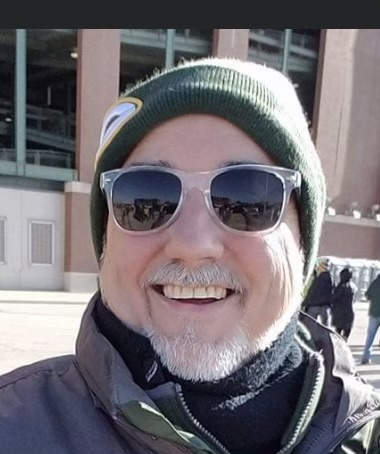 Robin Russell Lee, 64, of La Crosse, passed away at home surrounded by his family on August 16, 2022, after an unexpected and rapid battle with cancer.

Robin was born on April 3, 1958, to Raymond and Carol Lee. He grew up in the La Crosse area and graduated from La Crosse Central High School in 1976. He had worked as a manager for his parents who owned and operated Showboat Lanes and Showboat North Bowling Alleys in La Crosse. Robin attended WWTC and received a degree in HVAC; where he then went on to work for Trane Company. He acquired a bachelor’s degree from Viterbo University while at Trane Company, whereby he worked in various capacities during his 28 years and retired as a technical service engineer on May 2, 2021.

Robin loved his family, riding his Harley, football games as a season ticket holder and shareholder of the Green Bay Packers – rarely missing a game and screaming “GO PACK GO!!” at Lambeau Field. He enjoyed traveling with his wife to many places nationally and internationally for vacations, and pulling his camper/toy hauler to several parks throughout the U.S. Robin’s other passion was rebuilding their home, along with doing projects as a handyman capacity for family and friends; he truly was a jack of all trades.

He is survived by his wife, Angella, and their blended family; his 3 children: Rachel (Jason) Beard, Rustin (Donna) Lee, and Justin Miller; his 2 step-children: Karie (Jon) Hamernik, Jacob Hanifl (Debie Evans-Hanifl); his 7 grandchildren: Morgan and Nathan Hamernik, Porsha Hanifl, Cian Evans-Grayson, Lillian Shulfer, Taylor and Calvin Beard; his mother: Carol Lee; his mother-in-law, Avanelle Genz; his sisters: Pamela (Robert) Rochester; Lisa (Tom) Lydon; and Jennifer (Troy) Olson; along with many nieces, nephews, and cousins.
He is preceded in death by his father, Raymond Lee; his father-in-law, Gerald Genz; grandparents and other relatives.

Online condolences may be given at couleecremation.com. His family would like to thank Gundersen Lutheran Hospice care team for the compassionate care received while at home.

In lieu of flowers, donations can be made to Gundersen Lutheran Hospice or to WWTC scholarship program for students pursuing a career in HVAC

*Please kindly RSVP by commenting on this obituary only if you plan to attend, along with number of attendees by September 15th.