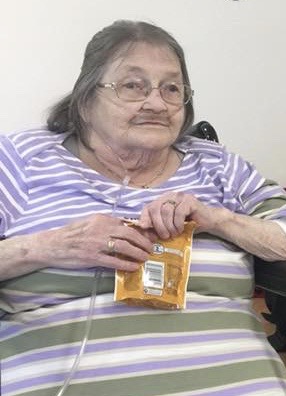 Ruth A Loging left us on December 3 2019, on her 81st birthday, after a short battle with cancer. She was born to Albert and Helen Pokrand (Potts) on December 3, 1938. Her father passed away when she was a very young child and was raised by her mother and loving step-father, John O. Olson. On April 11, 1957, she married her best friend and love, Melvin H. Loging who predeceased her on March 7, 1987. Together they had three children. She was a member of the West Salem American Legion Auxiliary. Her favorite pastime was turning the pages of her many books and later when her eyesight decreased, listening to her books on her tablet.

She is survived by her two daughters, Tammy Johnson of Black River Falls and Sheri (Steven) Craig of West Salem; her grandchildren whom she loved so very much, Scott (Kelly Bibeau) of Inver Grove Heights, MN and Sierra Craig of West Salem. Her great-grandson, Daniel held a very special place in her heart. She also leaves behind Cinnamon, her loyal friend and companion.

She was predeceased by her husband, her youngest child, Terry Scott on July 27, 1992, and her parents.

The family wants to thank the Gundersen Lutheran Hospice team and Mulder Health Care for their compassion. Many heartfelt thanks to KK Abbott for the care and kindness given to our mom and grandma.

Per mom’s request there will be no formal service, but she would love for you to join her family on Monday, December 9, 2019 at the West Salem American Legion, 148 Leonard St. S., West Salem  from 3pm to 7pm to celebrate her life. A light lunch will be served. Bring your memories.

Memorials can be directed to the family.