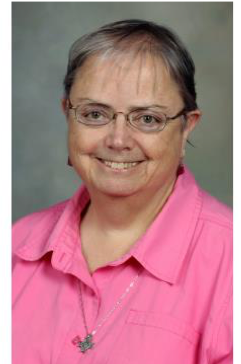 Jean Marie Moore was born in Chuquicamata, Chile on February 13, 1953 to Mary Ruth (Noll) and Joseph Aloysius Moore, Jr.  Her parents moved to Chile five months after they were married. Her father worked there for a large U.S. copper mining company. Jean, her sister Cindy and her brother Steve were all born in Chuquicamata.  A second sister, Kathy, was born following the family’s return to the States. After five years in Chile, Sister Jean’s family moved to Wauwatosa, Wis. in order to ensure “proper schooling near their home.”

Her first two years of grade school were at St. Jude the Apostle School in Wauwatosa.  Her family then moved to Brookfield, Wis. where she attended St. John Vianney School. After graduating from the eighth grade, Jean attended Pilgrim Park Junior High for one year before moving to Brookfield Central High School.  During high school, she participated in various sports and clubs. Also, Jean’s family hosted foreign exchange students from Iceland and Italy.  Sister Jean maintained connection with her “foreign exchange brother and sister” throughout her life, even visiting them abroad.  Upon graduating from high school, Jean attended the University of Wisconsin-Madison and earned a bachelor’s degree in secondary education with a concentration in Spanish. She especially enjoyed her junior year studying abroad in Spain.

Friends had always been important to Sister Jean. Family was considered  her best friends. Sister Jean and her sisters (and often her brother) spent many a vacation together exploring their family roots in Ireland, or just hanging out by the ocean. “My family is a source of strength and support for me in their love and understanding.”

Sister Jean continued her education with a master’s degree in Spanish and Foreign Languages from Purdue University. With her graduate degree in hand, she began teaching Spanish at Woodstock High School in Woodstock, Ill. There she met the Franciscan Sisters of Perpetual Adoration (FSPA).  That is when she started to deeply listen to the many messages in life God had been giving her, ultimately calling her to religious life. After visiting numerous religious communities, talking with many sisters, and somehow being nudged by St. Francis of Assisi, Jean entered St. Rose Convent in La Crosse, Wis.  On August 6, 1983 Sister Jean made her first profession of vows as a FSPA.  When reflecting on her choice of vocation, she said, “Upon visiting Maria Angelorum Chapel, I knew that I could never leave this.”

Sister Jean’s ministry as an FSPA centered around her love of teaching and St. Francis and St. Clare.  She continued her education earning a Ph.D. in Second Language and Culture Education from the University of Minnesota in St. Paul and a Masters in Franciscan Studies from the Franciscan Institute at St. Bonaventure University in St. Bonaventure, New York.  In her first year in community, she was Co-Director for the La Crosse Diocese Hispanic Ministry.  She taught Spanish at Wayne State College in Nebraska for a year before transferring to Viterbo University in La Crosse as a Spanish instructor in 1985.  After completing her doctorate, she returned to Viterbo as assistant professor of Spanish from 1990 to 1993.  From 1993 to 1997, Sister Jean served as the Dean of the School of Letters and Sciences at Viterbo.  She then became Vice-President of Student Development from 1997 to 2005. While at Viterbo, Sister Jean volunteered at the federal prison at Oxford, Wis. as a retreat leader, mentor and friend to inmates. After a year’s sabbatical, Sister Jean was appointed the Director of Mission Integration for the Franciscan Sisters of Perpetual Adoration, a position she held until 2016.  During that time she served as a pilgrimage leader (about 20 trips) for the Franciscan Pilgrimage Program in Assisi, Italy until 2018.  From 2016 to 2019, Sister Jean was back at Viterbo University teaching classes in Franciscan Traditions and Values. Sister Jean’s most recent ministry was that of freelance writer and presenter. Sister Jean has been selected to be honored with the Viterbo University Pope St. John XXIII Award, the highest non-academic award bestowed by the university, in May 2020.

Community members, family and friends, remember Sister Jean as someone that always loved life in any of its aspects.  Creativity and Franciscanism went hand-in-hand for her. She was in the midst of writing a book on Pieces of the Parchment-Rubrics for Daily Living.   Her love of teaching, sports and cross-cultural experiences were always part of her life.  This academic year she still served as chaplain for the Viterbo University women’s basketball team. She always had a story of St. Francis of Assisi to fit any occasion. From childhood Sister Jean “dabbled in arts and crafts” from woodworking to stained glass to photography to jewelry making. Many remember the fun time Sister Jean provided through her “Annual Doctor Sister Dean Jean Golf Scramble” at the end of each school year at Viterbo University.

Sister Jean is survived by her religious community and her sisters Cindy King of Ft. Meyers, Fla. and Kathy (Robert) Lemke of Wauwatosa, Wis. and her brother Steve (Lynn) Moore of Chaska, Minn. and several nieces, nephews, grandnieces and grandnephews.  She was preceded in death by her parents, Mary and Joseph.

Sister Jean has requested a natural burial. Friends may call Wednesday, March 4, 2020 after 10 a.m. at St. Rose Convent.  A prayer service will be held that evening at 6:30 p.m. in Mary of the Angels Chapel.  A Mass of Christian Burial is scheduled for Thursday, March 5 at 10 a.m. in Mary of the Angels Chapel.  Burial will take place immediately after in the natural burial plot at Villa St. Joseph, La Crosse. Coulee Region Cremation and Funeral Home is assisting with the arrangements.

“Place your heart in the figure of the divine substance.”  ~St. Clare